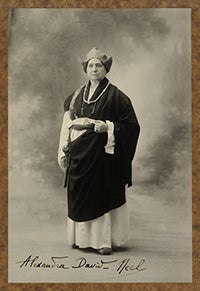 Seven years ago, I curated an exhibition on women travelers at the Booth Center for Special Collections. During my research I was surprised and delighted by the discovery of the trove of women’s papers held in the manuscripts repository: diaries, letters, and manuscript works that, for the most part, had been forgotten or side-lined by the major collecting areas -- my understanding is that this is not an unusual phenomenon unless an archive has been created with a specific focus on women’s collections.

One of the sub-themes of the exhibition was intrepid women travelers to remote and so-called “exotic” locations. Of course the names of Gertrude Bell and Freya Stark come to the fore – and I was rewarded by finding letters, books and photographs to represent them. Then a helpful colleague told me about Alexandra David-Neel (1868-1969), described variously as explorer, Buddhist spiritualist, writer and anarchist, who garnered fame not only by traveling to Lhasa, Tibet in 1924 when it was closed to foreign visitors, but also as the first woman to do so. Needless to say, I was crestfallen not to have come across anything by her in the repository. My exhibition went on without this amazing and fascinating woman traveler.

Last month, I found myself looking into a box of letters written to Marie-Therese Cosme, wife of Henri Cosme, the French ambassador to China in 1939. There, a few folders from the front were two letters written in the neat, legible hand of Alexandra David-Neel. Both are dated during the Sino-Japanese war (1937-1945), at the time David-Neel, aged 69, was trekking through China to Tibet, with all of her research, translation materials and books. The latter items are her primary concern as she appeals in two letters to Madame Cosme for help to locate and secure them at the English and Canadian mission stations in Chansi and Hunan, as well as at her house, where they were stored.

Following are the two letters from Alexandra David-Neel to Marie Therese Cosme. I have provided a rudimentary translation of the first, dated August 1, 1939; you can find the translation at the end of this post. I invite readers to try their hand at translating the other. Better yet, contact me to arrange for a visit to view these in person! 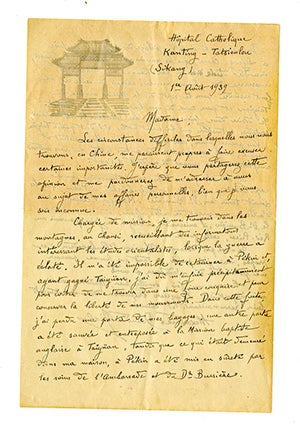 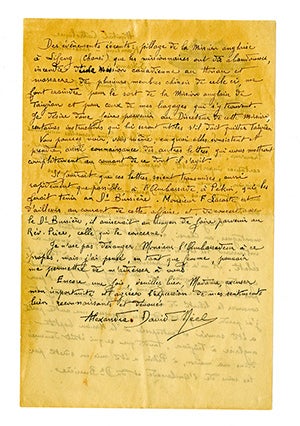 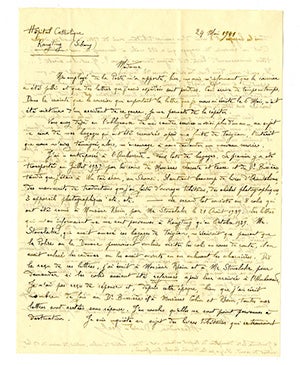 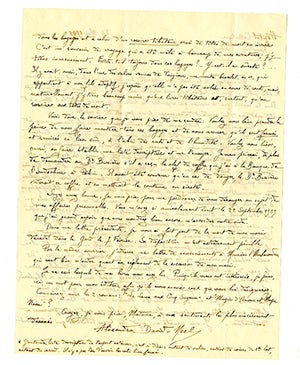 Alexandra David-Neel was born Louise Eugenie Alexandrine Marie David in Saint-Mande, Paris, France, on October 24, 1868. She was the daughter of Louis David, a journalist and teacher. Her mother was from Belgium where the family relocated and resided until David-Neel was six. A precocious and intrepid explorer of her own backyard as a child, David-Neel never outgrew her wanderlust.  When she was 17 she took a train to Switzerland, across the Saint Gotthard Pass to Lake Maggiore in Italy. A year later she cycled to Spain and then to London, where she became involved in a study group associated with the Theosophical Society founded by Madame Blavatsky. In 1889, David-Neel moved to Paris to audit courses in Eastern religions at the Sorbonne. Women were not admitted for degrees. In 1890, she travelled to India funded by an inheritance from her grandmother.  When funds ran out, she joined a traveling opera company as a singer. The company performed in North Africa and Algeria where she met and married a railroad engineer, Philippe Neel. As always, ahead of her time, she hyphenated her surname to include both maiden and married names.

By 1911, David-Neel had gained some renown in France through lectures on Eastern religions. She was able to return to India on a grant from the French Ministry of Education to study Sanskrit in Benares. During this trip she met the 13th Dalai Lama, recently fled from Tibet after an incursion from China. David-Neel became the first noted woman to engage in a dialogue with the Dalai Lama on spiritual enlightenment. In 1924, David-Neel visited Lhasa, Tibet, in disguise, with her long-time traveling companion, a young Lama named Aphur Yongden. She remained in Lhasa for two months, although she never renewed her acquaintance with the Dalai Lama.

David-Neel returned to France for some years between 1925 and 1937 when she again traveled to China. Unfortunately, this time she was caught in the outbreak of the Second World War and was unable to return home until 1946.

Along with translations of Tibetan sacred texts, David-Neel wrote over 30 published books on Eastern religion, philosophy and spiritualism. From book sales she was able to purchase a house in Digne-les-Bains, France, where she lived out her life with Yongden, who died in 1955. David-Neel lived to her 100th year. In 1973 her ashes and those of Yongden’s were scattered on the Ganges River near Benares. Her house in Digne is now the Alexandra David-Neel Museum. David-Neel was also recipient of numerous honors, including the Gold Medal of the Geographic Society of France, and was named a Chevalier of the French Legion of Honor.

The difficult circumstances in which we find ourselves in China appear to be appropriate excuse for certain importunities. I hope that you share this opinion and pardon me for addressing you on the subject of my personal affairs, even though I’m not known to you.

Charged with a mission, I found myself in the mountains, in Chansi, collecting interesting information on oriental studies, when war broke out. It was impossible for me to return to Peking, and having reached Taiyuan, I had to flee hastily to avoid finding myself in a conquered [zone?] and to ensure freedom of movement. During the escape I lost a part of my luggage; another part was saved and stored at the English Baptist mission in Taiyuan, while what remains at my house in Peking has been secured by the ambassador and Dr. Bussiere.

These recent events: pillaging of the English mission at Sifeng (Chansi) which led to abandonment by the missionaries, burning of the Canadian mission in Hunan and massacre of several Chinese members, make me afraid for the fate of the English mission in Taiyan and afraid about my belongings there. I wish to convey some instructions [information] to the director of this mission that he will find helpful if he has to leave. You will see for yourself what this is and also know what is in the other letters which will apprise you completely.

It is necessary that these letters are transmitted as soon as possible to the Ambassador of Peking who will give them to Dr. Bussiere. Monsieur F. Lacaste is current on this matter anyway and together with Dr. Bussiere he will know the means to reach Rev. Price, whom this concerns.

I do not dare to disturb the Ambassador about this but I think being a woman permits me to appeal to you.

Once again, I wish, Madame, to be excused of my importunity, and express my best appreciation and devotion,