In honor of American Archives Month, I have decided to highlight a letter handwritten by English poet Alfred, Lord Tennyson, and later acquired by a private manuscript collector. The independent collector no doubt enjoyed obtaining the document. The art of collecting manuscripts is exciting.

However, if independent collectors go further and give such documents to archival repositories, they facilitate the perpetual use of the documents by scholars and the general public across the globe. Archives provide secure, temperature-controlled facilities to preserve these materials. Archives routinely acquire one-of-a kind, primary source documents which provide important clues about the lives of the people who wrote, received or were mentioned in them.

Alfred, Lord Tennyson (1809-1892) was the preeminent English poet during the Victorian era. Among his wide array of works are “Ulysses,” “In Memoriam,” “Crossing the Bar,” and “The Charge of the Light Brigade.” In 1884, Tennyson was raised to the peerage.

Lionel Tennyson (1854-1886), Alfred’s second son, found employment with the India Office in 1877. Lionel was less serious than his brother Hallam. On December 15, 1881, Alfred Tennyson wrote a letter to Lord Enfield to try to obtain a post for Lionel as a secretary. The letter is found in  box 1, folder 20 of the Edith Crocker – Andre de Limur Collection.  The letter reads as follows: 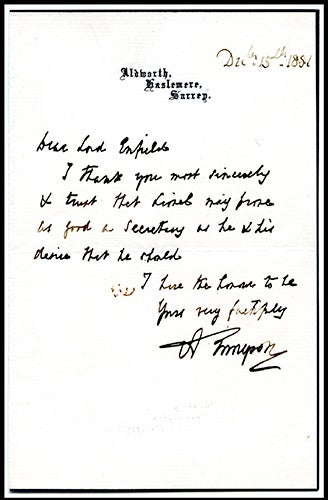 I thank you most sincerely
& trust that Lionel may prove
as good a secretary as he & his
desire that he should.

I have the honor to be
Yours very faithfully

As this letter suggests, Lionel, in 1881, sought to become private secretary to Lord Enfield (1830-1898, later 3rd Earl of Strafford), who served as Under-Secretary of State for Foreign Affairs from 1871 to 1874 and Parliamentary Under-Secretary for India from 1880 to 1883. Alfred hoped to place his son Lionel in this position or one like it. On December 17th, just two days after Alfred’s letter, Lionel wrote a letter to Henry Cameron informing him that he had received the appointment.1  However, the secretary post was only for one year.

Lionel travelled to India in 1885, and on a hunting trip in Assam was stricken by malaria. Sadly, he died in April 1886 aboard a boat in the Red Sea, which was transporting him home to England. Alfred was devastated by the loss of his second son, and touched on his sense of loss in the poem “To the Marquis of Dufferin and Ava.”

By acquiring this letter, a private collector obtained a significant primary source document that sheds light on the life of Tennyson. This letter is now safely preserved in the Booth Family Center for Special Collections, where it is available to scholars worldwide.