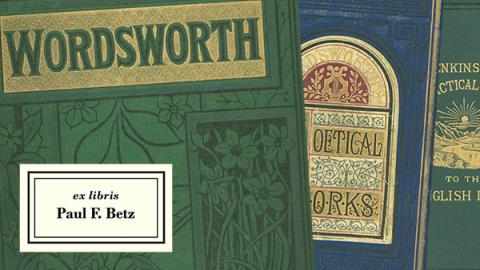 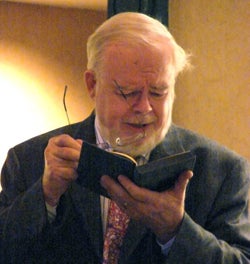 The Library and the Booth Family Center for Special Collections will be immeasurably enriched by the gift of Professor Paul F. Betz's extraordinary collection of books, manuscripts, art objects and artifacts relating to William Wordsworth, associated writers of the British Romantic Period, and other figures in English literary history. This collection, to be given over time, provides an unprecedented resource for scholars of the British Romantic Period and beyond.

Georgetown Professor Emeritus Paul F. Betz, after receiving his Ph.D. from Cornell University in 1965, taught in the Department of English until 2007 and remains active as a Wordsworth scholar and in University affairs. One of the finest collections for its period and subject in the world in private hands, the Betz collection of Wordsworth and the early Romantics served as one of the bases for the recently published definitive Bibliography of William Wordsworth (Cambridge 2013). In the preface to that volume, scholar Mark L. Reed remarks that Betz’s “achievement” as a collector is “unmatched of its kind in our time.” 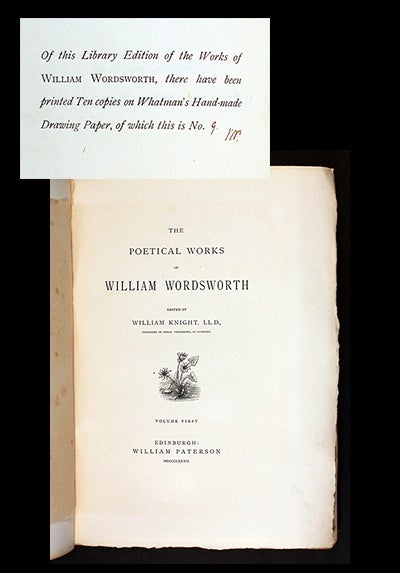 The inaugural installment of Betz’s gift in 2014 included a special copy (one of only ten) of William Knight’s edition of Wordsworth’s Poetical Works, shown here. Other highlights of the Betz Collection include: The rare first edition of Lyrical Ballads (1798), one of the first major works of the British Romantic era; the second edition of Lyrical Ballads, whose preface set forth Wordsworth’s manifesto for Romantic poetry; first and early editions of the rest of Wordsworth’s works, many of them presentation or association copies; a large number of books from Wordsworth’s and Southey’s libraries, including several “Cottonian” bindings—books whose bindings were covered by the two poets’ daughters in colorful patterned muslin; and a substantial number of letters and manuscripts by or relating to Wordsworth, and by a wide array of his contemporaries, as well as associated prints and drawings.

In addition to his gift of the books and manuscripts themselves, Betz has generously funded an endowment to support the collection. With characteristic foresight, Betz has ensured that the terms of the endowment allow its proceeds to be used not only for future acquisitions—thus ensuring that the Library will be able to take advantage of opportunities to acquire important additional materials as they arise—but  also for conservation, access, and promotion of the collection. A supplementary endowment will eventually provide support for visiting scholars to travel to Georgetown to consult the collection.

Professor Betz has been named Honorary Curator of the Collection. The Paul F. Betz Wordsworth and English Literature Collection will reside in the Paul F. Betz Reading Room in the Booth Family Center for Special Collections on the fifth floor of Lauinger Library. As it is cataloged, this remarkable collection will be made available there for consultation by scholars and students, will feature frequently in Georgetown classes, and will be presented to the public in an ongoing series of exhibitions.

Through his generosity in placing the fruits of his life’s work at Georgetown, Paul F. Betz has permanently established the Hilltop as a prime destination for students and scholars of British Romanticism and of the great poet of Rydal Mount.

A list of books cataloged so far for the Betz Collection is available in the Library's online catalog, HoyaSearch. Find a preliminary inventory of manuscripts and related materials in the Collection's finding aid.

For two related collections honoring Betz's late wife and father-in-law, see The Dorothy M. Betz Collection of French and Francophone Literature and The Murray L. Marshall Collection of Materials Relating to the Sonnet and to Twentieth Century Poetry Magazines.

A list of catalogued books from the Betz Collection in HoyaSearch
Finding Aid to the Paul F. Betz Wordsworth and English Literature Collection